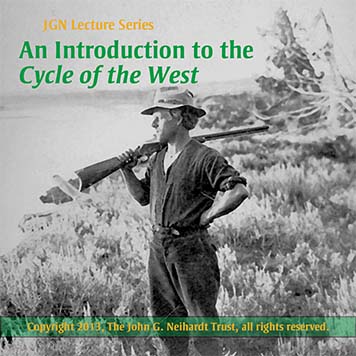 John Neihardt, author of A Cycle of the West, taught English at the University of Missouri from 1949 to the early 1960s. One of his courses titled Epic America was immensely popular and always had a waiting list for admittance to the course. The Epic America course covered the Song of the Indian Wars and the Song of the Messiah, two of the five parts of A Cycle of the West. In the early 60s, the course was video-taped so it could be offered after his retirement from the university. This DVD is a re-edited version of a lecture from the Epic America course.

In this lecture, Larry Hutchins, producer and director of the Epic America series, interviews John Neihardt on the American history surrounding A Cycle of the West and covers Neihardt’s reasons for writing the Cycle. This introduction was filmed in 1962.