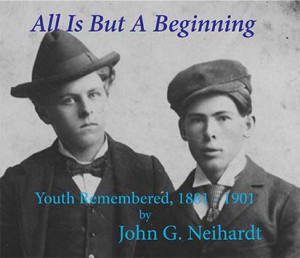 All Is But A Beginning is now available as an audio book for digital download at Audible.com, Amazon and iTunes.

“This episodic story of my boyhood and youth is offered as a token of heartfelt greeting to the young of the much discussed present generation. Many of those may know me, by my Black Elk Speaks, A Cycle of the West, or television appearances perhaps, as a spiritual comrade in this amazing earthly adventure of ours. Happily there is no “gap between us; for it will be noted that my somewhat garrulous rememberings alternate freely between tears and laughter, and I am therefore not unacquainted with the hardships and hilarities incidental to growing up in a world notoriously out of joint.”

All Is But A Beginning is read by Robin Neihardt, the author’s grandson. 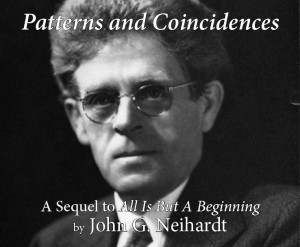 Patterns and Coincidences is now available as an audio book for digital download at Audible.com, Amazon and iTunes.

This audiobook is the unabridged reading of John Neihardt’s second autobiographical volume, Patterns and Coincidences.

A quote from the introduction:

“Those who may be acquainted with the youth section of this testament, ending with the ritualistic burning of my first printed book, The Divine Enchantment, have noted that I am not presenting a chronological chain of events faithfully linked in one-two order. Rather, I am concerned with rare moments that may be called high spots of experience – moments of insight and wonder, moments of comedy, of happiness or sorrow, of pain, of beauty, or even of beauty in pain – as I shall have occasion to remember when the time and mood are right.”

This audio book, approximately 3 hours and 20 minutes in length, was read by John Neihardt’s grandson, Robin Neihardt, and was recorded and produced at Skyyrim Studios, Wickenburg, Arizona 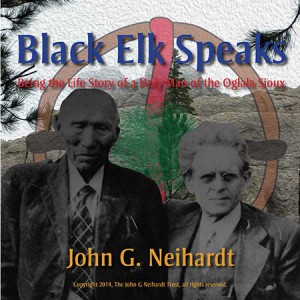 Black Elk Speaks is now available as an audio book for digital download at Audible.com, Amazon and iTunes.

The famous life story of the Lakota healer and visionary, Nicholas Black Elk.

Widely hailed as a spiritual classic, this inspirational and unfailingly powerful story reveals the life and visions of the Lakota healer Nicholas Black Elk (1863–1950) and the tragic history of his Sioux people during the epic closing decades of the Old West. In 1930, the aging Black Elk met a kindred spirit, the famed poet, writer, and critic John G. Neihardt (1881–1973) on the Pine Ridge Reservation in South Dakota. The Lakota elder chose Neihardt to share his visions and life with the world. Neihardt understood and today Black Elk is known to all.

Black Elk’s remarkable great vision came to him during a time of decimation and loss, when outsiders were stealing the Lakotas’ land, slaughtering buffalo, and threatening their age-old way of life. As Black Elk remembers all too well, the Lakotas, led by such legendary men as Crazy Horse and Sitting Bull, fought unceasingly for their freedom, winning a world-renowned victory at the Little Bighorn and suffering unspeakable losses at Wounded Knee.

Black Elk Speaks however is more than the epic history of a valiant Native nation. It is beloved as a spiritual classic because of John Neihardt’s sensitivity to Black Elk’s resounding vision of the wholeness of earth, her creatures, and all of humanity. Black Elk Speaks is a once-in-a-lifetime read: the moving story of a young Lakota boy before the reservation years, the unforgettable history of an American Indian nation, and an enduring spiritual message for us all. 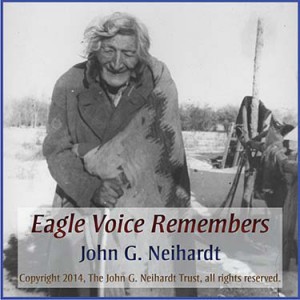 Eagle Voice Remembers is now available as an audio book for digital download at Audible.com, Amazon and iTunes.

Eagle Voice Remembers is John Neihardt’s mature and reflective interpretation of the old Sioux way of life. He served as a translator of the Sioux past, whose audience has proved not to be limited by space or time. Through his writings, Black Elk, Eagle Elk, and other old men who were of that last generation of Sioux to have participated in the old buffalo-hunting life and the disorienting period of strife with the U.S. Army found a literary voice. What they said chronicles a dramatic transition in the life of the Plains Indians; the record of their thoughts, interpreted by Neihardt, is a legacy preserved for the future. It transcends the specifics of this one tragic case of cultural misunderstanding and conflict and speaks to universal human concerns. It is a story worth contemplating both for itself and for the lessons it teaches all humanity.”-Raymond J. DeMallie.

In her foreword to Eagle Voice Remembers, Coralie Hughes discusses Neihardt’s intention that this book, formerly titled When the Tree Flowered, be understood as a prequel to his classic Black Elk Speaks. 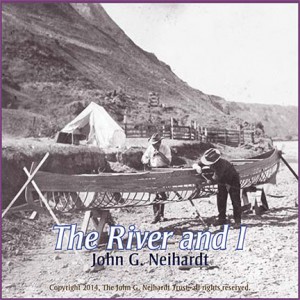 The River and I is now available as an audio book for digital download at Audible.com

In 1908, the brilliant poet and writer John G, Neihardt traveled by canoe down the then-untamed Missouri River for fifty-six days. His account, rousing and elegantly reflective, showcases the long ago, fascinating world through which the mighty river passed. The River and I is at once a classic adventure tale, an enduring homage to the Old West, and a tale of an abiding love for a relentless river and those affected by it.

“The book is wholly admirable in style and story.” – New York Times

“A memorable blending of poetry, realistic on-the-spot reporting, fur trade history, Greek Mythology, and love for the river  . . . that reaches a high-water mark in the literature of the West.”
– Denver Westerners Monthly Roundup