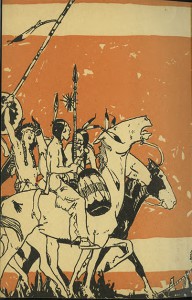 The Song of the Indian Wars 1

The Song of the Indian Wars deals with the last great fight for the bison pastures of the Plains between the westering white men and the prairie tribes—the struggle for the right of way between the Missouri River and the Pacific Ocean. Since the period was of of crucial importance in the process of our national development, I have felt the obligation to be accurate. I have neither fictionized my material nor sentimentalized my characters. It seems unnecessary to list all the printed sources upon which I have drawn during the years I have devoted to the subject. The list would be long, and I doubt if any work of considerable significance bearing on the period has escaped me, whether a government report, a formal history or a personal narrative. But one can not safely trust the printed sources alone, and I have made it a duty to consult many veterans who were themselves a part of what I have to tell. Among these I am especially indebted to the following:

Brigadier-General Anson Mills of Washington, D.C., who served with conspicuous gallantry under Crook both in the Rosebud fight and in the Battle of Slim Buttes; Brigadier-General Edward S. Godfrey of Cookston, N.J., who distinguished himself in the Reno Battle on the Little Big horn; Brigadier-General Walter S. Schuyler of San Francisco, who served under Crook and rendered brilliant service under Mackenzie in the winter battle with the Cheyennes on Willow Creek, Brigadier-General Charles King of Milwaukee, the famous soldier-novelist, who was one of Crook’s lieutenants in the campaign of 1876; Major Henry R. Lemly of Washington, DC, who was Crook’s Acting Assistant Adjutant General during the famous “horse-meat march” in pursuit of the Indians after the Custer fight, and who witnessed the death of Crazy Horse; Colonel Homer W. Wheeler of Los Angeles, rich in experience as a plainsman and as an Indian fighter; the late Captain Grant P. Marsh of Bismarck, ND, who was in command of the steamer Far West during the campaign of 1876 and transported the wounded pf Reno’s command from the mouth of the Little Big Horn to Fort Abraham Lincoln; Captain James H. Cook of Agate, Nebraska, famous plainsman and army scout, intimate friend of the great Chief Red Cloud and of most of the other notable Sioux Leaders; Mrs George A Forsyth of Wilkes-Barre PA, wife of the late Brigadier-General George A. Forsyth, the hero of Beecher’s Island’ Captain Howard Morton of Palo Alto CA, who fought with Forsyth on the Rickaree Fork of the Republican and who still carries the bullet that tore out one of his eyes in that wonderful little battle; Mr. William C Slaper of Los Angeles, who served as a private under Reno in the Battle of the Little Big Horn; Sergeant Max Littman of St Louis and Sergeant Samuel Gibson of Omaha, both of whom were in the Wagon Box fight; Mr. Wallace of Okarche, OK, who was one of Custer’s scouts in the winter campaign ending with the Battle of the Washita; Mr. John Hunton, still living at old Fort Laramie where he was post trader in the ‘sixties; Red Hawk, an Oglala Sioux, who knew and fought with Crazy Horse; my “brother-friend” Curly, one of Custer’s Crow scouts, who told me only the truth, however lustily he may have drawn the long bow for the amazement of over credulous journalists. 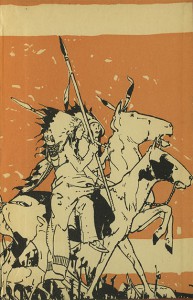 The Song of the Indian Wars 2

Indirectly I have gotten much valuable material for The Song of the Indian Wars out of the Indian consciousness through those who were intimately acquainted with the Sioux, Cheyenne and Arapahoe during the period of the last wars. Also much valuable reminiscence of white men, other than those named, has been made accessible to me by Mr. E.A. Brininstool of Los Angeles, whose extensive collection of source material bearing on the Indian Wars has cost him many years of effort and is equalled by few private collections of the sort in the country. Dr. Grace R. Hebard of the University of Wyoming, co-author with Mr. Brininstool of the Boxeman Trail, a work of the highest authority on the Red Cloud Wars, gave me generous and timely aid by placing important original documents in my hands before the publication of the volume named. Mr. Doane Robinson of Pierre, Secretary of the State Historical Society of South Dakota and a high authority on the whole history of the Plains, has further increased my debt to him, a debt of long standing.

For some of the Indian speeches I am indebted to the works of Dr. Charles A. Eastman, who, himself a Sioux, was intimately acquainted with many of the great leaders of his people.

As to the country in which my story moves, I have reason to know it well. My acquaintance with it began when I lived with my pioneering grandparents in Kansas on the upper Solomon. Signs of the vanished buffalo were still there, and I have sat by cow-chip fires. Also, I have taken the trouble to study at first hand the topography of the various localities and stretches of country that I have undertaken to describe.

Since my interest in the period treated is not of recent origin, it is impossible to give credit to all who, in one way or another, have helped me; but the foregoing will serve to indicate the means employed by way of getting at the truth and into the mood of the time.

Wherever I have found various versions of particular incidents I have been careful to adopt that one which seemed best supported by the evidence. Perhaps the greatest variation of testimony is to be found in the matter of Custer’s last battle. I may say that I am quite familiar with the controversy; nor should those who may resent my account as that of a Custer partisan accuse me of having never see the report of the Reno investigation. I spent a wonderful day and night with and I found it a rich mine for the psychologist.

In the interval between a four and a half year task just finished and other soon to be assumed, I may be allowed the satisfaction of noting the steadily increasing success of The Song of Three Friends and The Song of Hugh Glass, both with the general public and in the public schools and colleges. Already in the progress made would seem to justify me in devoting my twenty best years to the Cycle.