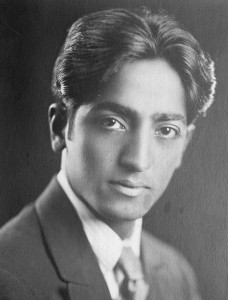 NOW and then, for several years, the press has been giving more or less sensational reviews of the young Hindu Krishnamurti, whose name is generally associated with Mrs. Besant’s and whom many are said to regard as the messiah of the twentieth century. Recently Krishnamurti visited America, and where he went a crowd went also, just as though he had been a highly advertised criminal or a queen or a champion bruiser or a movie star in the midst of his latest divorce.

Shall we suppose that the crowds that surged to see this alleged teacher will storm about the publishing house that has just issued Krishnamurti’s message, demanding immediate delivery of the suspicious book at $1.75 a throw? Perhaps not. But if it should be so, there would surely be great disappointment in those crowds, for a mild young man has nothing startling to offer. He does not attack other religions. The way he points to happiness is no short cut and is to be only through self-control. Thus — and this to a novelty-seeking world is the damning thing — Krish-namurti has nothing new to say. He has nothing new to say because essential wisdom is ancient. The Chinese seer, Lao Tze, was teaching 2400 years ago substantially what this youth is teaching now in other words: and when Lao Tze taught, his message was already old beyond the Himalayan Confucius, the moralist, did not understand it, and for all the advice he gave to others, sorrow, deepening into black despair, was his at last. Penetrate the heart of any great religion, it is this old pragmatic truth that is there. More than one sect, America is avowedly based upon and, though described in new scientific terms, it is central in psychotherapy. It has to do with the illusion of the importance of selfish desires, with the loss of self in the largest relations the individual can understand. Just as the North Pole it may be said truthfully that any straight line radiating therefrom leads to summer, so would this doctrine teach that all paths leaving the self lead toward happiness.

It hardly seems likely that any such doctrine is going to get far in America just now. It is conceivable that the radiant youth of Krishnamurti, together with the clamor of his Oriental origin, might attract enough idle and under-stimulated people to constitute a “movement.” But there is [no?] surer way to kill a truth than by institutionalizing it.