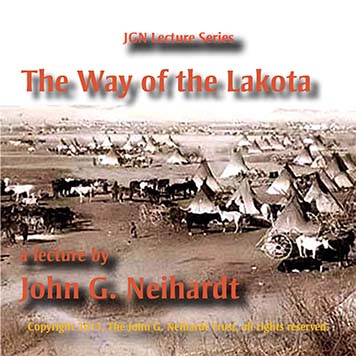 John Neihardt taught English at the University of Missouri from 1949 to the early 1960s. One of his courses titled Epic America was immensely popular and always had a waiting list for admittance to the course. In the early 60s, the course was video-taped so it could be offered after his retirement from the university. The Way of the Lakota is a lecture about the traditional way of the Lakota People It is a lecture in the Epic America course.

In this DVD, John Neihardt gives a traditional account of the origin of the Sioux and a fascinating view into the time-honored way of the Hoop of the People as told to him by his spiritual father, Black Elk.

In the lecture, The Way of the Lakota, drawing heavily on Black Elk’s teachings, Neihardt goes into detail about the Origin of the Lakota people, the seven teoshpaiay and the organization of the Great Hoop of the People.

John Neihardt Speaks of his association with the Native Americans:

“Some of my most vivid boyhood memories are concerned with true pioneer life in north-western Kansas, where I lived with covered-wagon grandparents in a sod house, with cow-chips gathered from the fenceless prairie for fuel, and wicks in bowls of lard for lamps . . .

In Nebraska, during my later boyhood and youth, I saw the frontier slowly vanish westward, being only vaguely aware of what was happening to my world.

The three most vital decades of my manhood were devoted to my Cycle of the West, designed to celebrate the great mood of courage characteristic of that epic time and country. I was never compelled to go in search of local color, which was all about me; and it was my privilege to know, as friends, many who had done their parts in the latter phases of that great Western epos – plainsmen, rivermen, Indian fighters from privates to generals and Indians of the Plains.

More than half a century ago I was living among the Omaha Indians, a Siouan people, and (with the name of Little Bull Buffalo) I was truly one of them in heart. Later I became intimately acquainted with the Sioux Indians of the Dakotas, and through friendships with many of the unreconstructed “long-hairs” of the tribe, who knew no English, was enabled to enter into the consciousness of the once great nomadic people. I shared, in the closest terms of intimacy and understanding, their rich memories and their culture.

Perhaps the most illuminating experience of my life was my association with Black Elk, a Holy Man of the Sioux who, twenty-five years ago, made me his spiritual son (with the name Flaming Rainbow) that he might teach me and that I in turn, might pass his teaching on to an alien world; for “soon he would be under the grass” (he said), and what was given him for all men would otherwise be lost. Some of what he taught me is in the tale here told.”