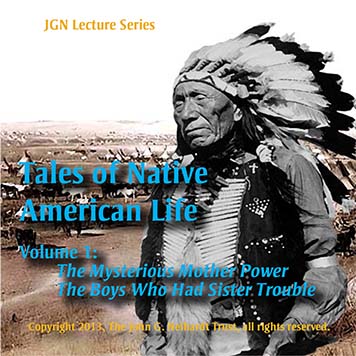 Of his meeting with the Sioux holy man Black Elk, John G. Neihardt once said, was the most memorable experience of his life. In 1930, while working on the concluding poem of his Cycle Of The West, Neihardt had gone to the Pine Ridge Reservation hoping to find “some old medicine man who had been active in the Messiah Movement and who might be induced to talk with me about the deeper spiritual significance of the matter.” In Neihardt, Black Elk recognized the one who had been sent to learn what “was given to me for men.” The next summer, in a long series of talks, Black Elk imparted his own life story and the story of the Oglala Sioux during the tragic decades of the Little Big Horn, the ghost-dance rising, and the Wounded Knee massacre.

Eagle Voice is a composite character; but the tale he tells is based upon the life story of Neihardt’s old friend Eagle Elk, whom he met with in the early 1940s. He died in 1945 at the age of ninety-four. The relationship that grew up between them is faithfully represented in the book Eagle Voice Remembers and is Eagle Elk in character, and in the idiom of his thoughts and speech. The adventures that Neihardt added to Eagle Elk’s, by way of giving a comprehensive view of the old Sioux world, are all authentic.

During the talks Neihardt had with Black Elk, and later with Eagle Voice, there were many stories and tales of Native American life of the people. They had been handed down from story teller to listener for generations and Neihardt put the stories to pen and paper to preserve them for all people.

John Neihardt taught English at the University of Missouri from 1949 to the early 1960s. One of his courses titled Epic America was immensely popular and always had a waiting list for admittance to the course. In the early 60s, the course was video-taped so it could be offered after his retirement from the university. Tales of Native American Life are re-edited lectures in the Epic America course.

John Neihardt (1881 – 1973) has left a legacy of some twenty-five volumes of poetry, fiction and Philosophy, and two autobiographical volumes, the second of which was published posthumously. He was a member of the National Institute of Art and Letters and from 1951 to 1967 served as chancellor of the American Academy of Poets. From 1921 until his death Dr. Neihardt was Poet Laureate of Nebraska, and his bust stands in the Hall of Fame of Nebraska’s Statehouse. His life and works are commemorated at The Neihardt Center in Bancroft, Nebraska, near the Omaha Indian Reservation.

My friend, I am going to tell you the story of my life, as you wish; and if it were only the story of my life I think I would not tell it; for what is one man that he should make much of his winters, even when they bend him like a heavy snow? So many other men have lived and shall live that story, to be grass upon the hills.

It is the story of all life that is holy and is good to tell, and of us two-leggeds sharing in it with the four-leggeds and the wings of the air and all green things; for these are children of one mother and their father is one Spirit.

. . . But now that I can see it all from a lonely hilltop, I know it was the story of a mighty vision given to a man too weak to use it; of a holy tree that should have flourished in a people’s heart with flowers and singing birds, and now is withered; and of a people’s dream that died in bloody snow.

But if the vision was true and mighty, as I know, it is true and mighty yet; for such things are of the spirit, and it is in the darkness of their eyes that men get lost.