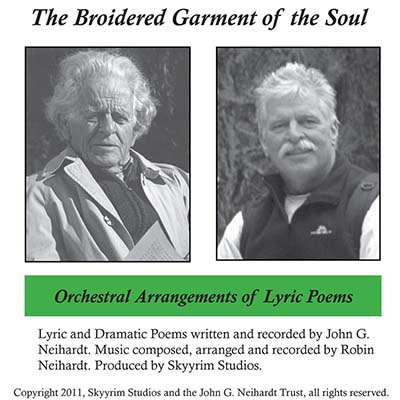 This CD can be purchased here.

Several years or so ago, I found vinyl recordings my grandfather made nearly 40 years ago containing recitations of John Neihardt’s  lyric poems. I remembered the recordings from earlier days, and wanted to make these recordings available in a more modern format. The first step was acquiring a record turntable, for I hadn’t owned one in years.

The vinyl records were then played and recorded into a digital format on the hard drive of my computer, saving them as wav files. Once in digital format, numerous hours were spent cleaning up the files by removing the “clicks” and “pops” so characteristic of vinyl records. The new digital audio files were then arranged on 4 CD’s which are available at the website: neihardt.com/

While listening to this new-found voice of my grandfather, I decided to compose original music for some of the lyric poems and, in the studio, digitally combine the music with the recorded voice of John Neihardt. As a music composer, and always looking for a new project, I felt if the desired effect could be achieved, this could be a way of honoring his legacy.

On many of the pieces, I was able to reduce the dynamic rhythm of his recitation to music note values (half note, quarter note eighth note, etc.) which then became primary rhythms in the compositions; thus tying the music and the lyrics together.

The result of these endeavors is this CD featuring John Neihardt’s lyric poems. I sincerely hope you enjoy listening.