Paw and Foot Prints in the Canyon 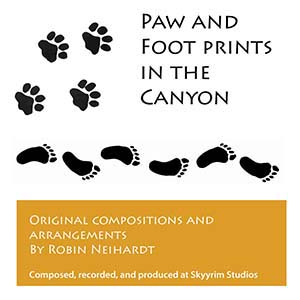 There is little canyon that runs through our property where I spend hours exploring all the draws and washes with Twinkle, my wonder dog. In the sand, we have left numerous trails of paw and foot prints alongside all the other critters that track through the canyon before and after us. This has resulted in the “not too original” name for my latest CD, Paw and Foot Prints in the Canyon. It is a fitting title for many ideas and musical treatments came to me while traipsing about.

This CD, released in January, 2012, is a collection of original works and several adaptations of old music. The first track, Guardarme Las Vacas, is adapted from a solo guitar piece I have played for many years composed by Luis De Narvaez for Vihuela in the mid-1500’s. I arranged it for harp and string orchestra which works quite well. There are two additional adaptations on the CD, track 4, La Folie D’Espagne and track 13, Leaning on the Everlasting Arms. Track 4 is a melody from the 1700’s or perhaps earlier that has been written as a theme and variations by more than 150 composers over the past 300 years. This is my stab at it. Track 13 is an adaptation for orchestra of an old hymn originally composed in 1887 by Anthony Showalter.

The remaining pieces are original compositions. Tracks 9 through 12 are a “muse” for guitar quartet. Perhaps my favorite piece on the album is track 14, Serenity Concerto for Cello, Violin and String Orchestra. It is written in three short movements, all of which are on this single track. Of the three movements, the second is my favorite. In track 15, The Hills, I “borrowed” a motive from a J.S. Bach work and have the Cello section playing it throughout the piece. I wrote Reverie, track 5, to be the music for a YouTube video I produced of the same name.