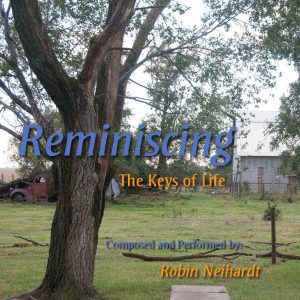 This album, Reminiscing, is a collection of original pieces for the classical  guitar composed and performed by me, Robin Neihardt. I usually do all my composing with a pen and paper in hand, actually a computer keyboard under hands. However, this time I have held a guitar in my hands and have written the music down after the fact. The CD can be purchased here.

When starting this project, my intention was to compose a piece of music in each key and present them in the circle of 5ths: C,G, D, A, E, B and F. I planned on calling the album The Keys of Life.

After I had proudly proclaimed the title to my immediate world, I was told by a friend, “That really isn’t much of a title.”

Fortunately, after hearing all the recorded pieces together, my wife Joy commented that Reminiscing would be a great name for the album. Since she volunteered to spell it for me, I immediately agreed with her and my original title now became several points of type smaller and is merely the subtitle.

I have spent a great deal of time composing over the last decade or two and even pieces I like a great deal will get named Study or Etude or In six-eight. In the past, I have even resorted to song naming contests. It appears I have difficulty providing names for my compositions.

I assume with that bit of knowledge in mind, you are probably able to guess correctly some of the titles in this recording. Ah yes, uh wrong! I wrote a piece in each key in major and minor, so I was forced to add major or minor to the title of each piece. Thus, C Major, C Minor, G Major, G Minor, D Major, D Minor, Etc. For some reason, I left out F Minor, but I am now on to another project, and it may never get written.

I must say that though these names are unoriginal and perhaps lazy, I am beginning to think they work well as titles for the music in this album. For as you listen to the pieces and perhaps begin Reminiscing, the titles will not become stumbling blocks that might hinder your imagination in any way!

This album was composed, practiced, recorded, edited, and mastered at Skyyrim Studios, Wickenburg, Arizona. My apologies to all those wandering the halls who had to listen to me learning these pieces.