The other night I was watching television, I know, a mistake in its own right, but I was. On this program, there were four people debating belief in God and belief in No God, two atheists and two Christians. I listened intently for a few minutes, though it did not take more than an instant to realize none of them would touch my heart or mind with their arguments. I was struck by the intense anger and hatred spewing forth from one atheist in particular. He was a scientist. The other atheist could not get past the earth being older than 10,000 years. He was a historian. Sadly the two Christians seemed to me to be defending an old man sitting on a large throne with long white hair and a flowing beard with a very angry look on his face. This was a debate, with all the arguing, with all the anger and vitriol, over truth and light and love? Can this really be? Would intelligent people, with years of experience in living and being, really want to fight about this? Of course the answer is YES! One only need look around the world to see the unbelievable limitation, control and carnage perpetrated by one against another in the name of God! I really do not want to visit about that right now, I have a simpler more personal bit I want to share. 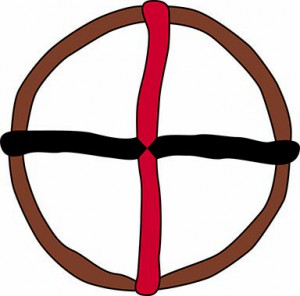 I think that over the past few thousand years, the human race has built up a powerful race consciousness. Can you imagine the sheer volume of thoughts that have been thought, the opinions that have been expressed? (From earlier visits you may recall that I believe that thoughts are things and have lasting power.) I have come to believe that the race consciousness operates in the subjective or unconscious side of our minds;  meaning there is a consciousness at work creating and building our physical existence that we are unaware of and for the most part, have left on autopilot to pursue its ends. It is filled with thoughts of limitation, poverty, and fear. I am inclined to believe that the continuing state of world affairs is primarily a result of the evolution or playing out of this race consciousness. I am not asking you to believe this or not, it is for you to decide, I am just visiting with you about it. This world then is the Hard Black Road of Worldly Difficulties that Black Elk, a Sioux Holy Man, told my grandfather about in 1931 that resulted in the book, Black Elk Speaks. The black road begins in the East of the Great Hoop where the days of man begin to the West where the days of men end. (The concept of the Great Hoop is an all inclusive, infinite space that includes the entire universe, and ALL things are contained within it. I recently found a 50 year old film of my grandfather talking about his meetings with Black Elk and about the meanings of the Sacred Hoop. I have cleaned up and edited the pictures and graphics and it is available as a lecture in the Epic America Course.)

I know the previous paragraph paints a pretty grim picture of humanity, but none-the-less, you can look around you and see that it is true. However, there is another side to this that can overcome this current state of being. It is personal, meaning it can only be done one person at a time, one consciousness at a time. It can only be achieved inside an individual conscious mind that is yearning for a greater understanding, and takes place in the space between the two ears. It requires belief and faith in an infinite intelligent consciousness that is good; and an understanding that conscious thought has power and can affect real change, a change that begins in the formless as a mold and evolves into the conditions of your life.

Let us say we are traversing the Hard Black Road of Worldly Difficulties and at some point we begin yearning for a realization of the true meaning of this existence. We truly begin to search inward for a spiritual understanding behind life. As Black Elk talked to my grandfather of the Black Road he stated that if that was the only road, this world would not mean much. But he said that there is another road, the Good Red Road of Spiritual Understanding. This red road begins in the South where lives the power to grow and proceeds to the North of the Great Hoop, the region of white hairs and death. The Red Road is the road the mind travels in search of spiritual understanding and guidance. If, when you have a great difficulty, and turn your mind inward in search of an answer, and then find it; you are using spiritual guidance to overcome worldly difficulty.  Black Elk said that where the Good Red Road intersects the Hard Black Road, that place is Holy and there springs the Sacred Tree of Life, which in man could be called realization. As more people turn inward for understanding, the world will change, and change for the better. Life can be truly wonderful, filled with prosperity, happiness and love. Why would we argue, fight and even kill over belief, or non belief, instead of turning inward and finding the real answer for ourselves?

1 Response to The Good Red Road